The Goalhanger's guide to football classics

Classic. Vintage. Retro. Whatever you want to call them, here are some of the Goalhanger's all-time favourite items from the wonderful world of football.

The Classic Football - The Adidas Telstar 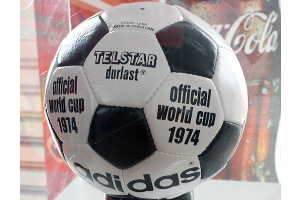 It's fair to say that nearly 50 years on, if you asked people to draw a football then the majority would probably end up with something that resembled the Telstar.

And where did the Telstar name come from ? It was taken from the communications satellites of the same name, and the same panelled appearance, that were launched into space in the early 1960s.

The legendary Puma King boot was first unleashed on the world of football back in 1968, created to honour Portuguese legend Eusebio's feat of being top scorer at the 1966 World Cup two years earlier.

In the years after their introduction, a pair of King boots became an object of desire for footballers around the world, not just at a recreation level but from some of the world's top players - Pele would wear them in 1970 as Brazil won a historic third title, whilst Diego Maradona and Lothar Matthäus would also lift the game's top prize wearing them in 1986 and 1990.

We can't include the Puma King and not give a shout out to the Copa Mundial, which was created by Adidas to rival by big German competitor. Released in time for the 1982 World Cup and worn by many of the greats in the 1980s and 1990s, such as Franco Baresi, Zinedine Zidane and Eric Cantona. 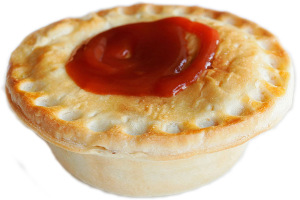 You can keep your visits to a swanky Michelin-starred restaurant, or corporate hospitality with the prawn sandwich brigade, when it comes to a culinary delight, few things in life can compare with a decent match-day pie on a freezing cold Saturday afternoon. Be it steak and kidney, beef and onion or everyone's new favourite, the chicken balti, you can't go far wrong with a pie at half time, especially if you add add a steaming hot cup of Bovril into the mix to help wash it down.

Just be careful of the heat coming out of that pie though - they've been known to reach temperatures matching that of molten lava, and often still seem to be cooking five minutes after you've bought them, rather than actually cooling down. 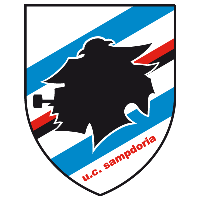 There are some great football badges out there, from the universally known designs of Manchester Utd, Liverpool and Arsenal, to relatively modern classics such as Nottingham Forest's tree logo and the iconic owl of Sheffield Wednesday.

However, the Goalhanger's favourite badge has always been the classic Sampdoria design.

The Italian club's crest has got a bit of everything... it's certainly unique (there's simply nothing else like it in the world of football), it's got the famous club colours and stripe on it, and there's a nod to the city of Genoa's heritage as a major port with the profile of a sailor dominating the middle of it (the sailor is named Baciccia, which translates to John-Baptist in English).

Most importantly, it's instantly recognisable as the logo of Sampdoria.

The Classics Football Lyrics - Half Man Half Biscuit

From the Wirral, and famous for turning down an appearance on Channel 4's The Tube because it clashed with a Tranmere Rovers match, Half Man Half Biscuit's songs may not have been everyone's cup of tea, but they certainly appealed to the Goalhanger. Whilst their lyrics covered many quirky aspects of modern life, it was some of their football-related stuff that made a quick impression on many fans back in the 1980's.

So, for the uninitiated, here are the lyrics to the classic All I Want For Christmas Is A Dukla Prague Away Kit...

There was one in the gang who had Scalextric.
And because of that he thought he was better than you.
Every day after school you’d go round there to play it.
Hoping to compete for some kind of championship.
But it always took about fifteen billion hours to set the track up.
And even when you did the thing never seemed to work.

So he’d send his doting mother up the stairs with the stepladders.
To get the Subbuteo out of the loft.
He had all the accessories required for that big match atmosphere.
The crowd and the dugout and the floodlights too.
You’d always get palmed off with a headless centre forward.
And a goalkeeper with no arms and a face like his.

And he’d managed to get hold of a Dukla Prague away kit.
‘Cos his uncle owned a sports shop and he’d kept it to one side.
And after only five minutes you’d be down to ten men.
‘Cos he’d sent off your right back for taking the base from under his left winger.
And come to half time you were losing four-nil.
Each and every goal a hotly disputed penalty.
So you’d smash up the floodlights and the match was abandoned.
And the dog would bark and you’d be banned from his house.
And your travelling army of synthetic supporters.
Would be taken away from you and thrown in the bin.

Now he’s working in a job with a future.
He hands me my Giro every two weeks.
And me I’m on the lookout for a proper transformer ...errr... 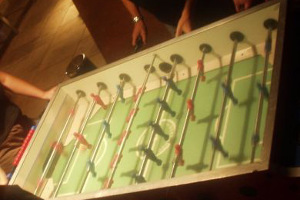 The name of the game might be different around the world (Baby-foot in France, Foosball in America, Kicker in Belgium, Fuzboll in some other places) but the joy of a game of table football is universal.

With a row of forwards, midfielders, defenders, and the all-important keeper, all stuck on those rotating, sliding bars it's a simple game to play, but a hard one to completely master, as anyone who's ever played against someone half-decent will testify. Feed the ball in from the hole at the side of the table, get the ball controlled by one of your players, move it sideways Ray Wilkins-style or knock it between the lines before you attempt to smash one goalwards without dislocating your wrists in the process. Remember the no-spinning rule is often in force though on some tables.

Great played with your mates, 2v2 or just 1v1, it's remained massively popular on mainland Europe since the 1950's. It's popularity waned a bit in the UK but has had something of a resurgence in recent years, with bars, clubs and schools all installing them again.